Although Peter has chosen to retire from the practice of law, he will continue to sit as a Member of the Transportation Appeal Tribunal of Canada as well as offer services as an Arbitrator and Mediator. He can be contacted through the office of Bernard LLP or directly at peterbernard78@gmail.com, telephone (604) 985-5052; mobile (604) 760-6272.

After obtaining his law degree from the University of British Columbia, Peter joined the long established Vancouver Maritime Law Firm of Macrae Montgomery Hill & Cunningham.  He was a Partner in that firm from 1969 to 1982.  During that period of time, he gained extensive experience in all areas of the Maritime Law practice.  In 1982, Peter joined the Vancouver firm of Campney & Murphy where he was a Partner until 2002, when he became one of the founding members of Bernard LLP.

Peter’s practice has enveloped a very broad spectrum in the field of Maritime Law over a period of more than 40 years, where he has represented ship owners and charterers in both international and coastal shipping, terminal operators, P&I Clubs, Hull and Machinery Underwriters, ship builders and various worldwide financial institutions.  The practice includes litigious matters in areas such as collision, salvage, maritime liens, pollution, immigration, bodily injury, carriage and chartering disputes and also includes commercial work including carriage and chartering along with ship purchase and finance.  Peter has been involved in Arbitrations and Mediations as counsel and as an Arbitrator or Mediator.

Throughout his career, Peter has continued to write on matters of Maritime Law with various forms of publication including monthly periodicals and law journals.  He has spoken often to an assortment of audiences in Canada, the United States and elsewhere.

Peter has been a leading influence in the marine community particularly in western Canada.  He has been a Director of the Chamber of Shipping, the International Maritime Centre, the Canadian Bar Association, the Canadian Maritime Law Association, Vancouver Maritime Museum.  He has chaired or otherwise organised many events, including the International Congress of Maritime Arbitrators in 1991, the International Conference of Marine Arbitration in 1988 and a number of continuing legal education seminars and presentations.  Peter was appointed Queen’s Counsel in January 2001 and is listed as a leading lawyer in Canada and in the maritime world in Who’s Who Legal, Best Lawyers.  Peter was recently given the honour of the Best Maritime Lawyer in Vancouver, British Columbia for 2011. 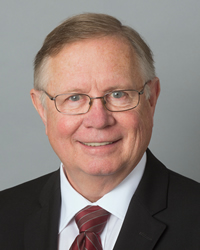