David practices in the areas of maritime and transportation law, insurance defence, product liability and civil and commercial litigation.  He has a broad range of experience including vessel arrest, collision, pollution, tug and tow, bodily injury and cargo in addition to non-maritime contract, insurance and employment matters and defending auto manufacturers in product liability claims.  David’s experience includes on board emergency response (including dealing with the Transportation Safety Board, Transport Canada, the United States Coast Guard, the National Transportation Safety Board and other regulatory agencies) on behalf of vessel owners.  He has assisted senior members of Bernard LLP on large maritime casualty matters.

Prior to joining the firm in 2010, David was judicial law clerk with the Court of Appeal of Alberta in Edmonton and practiced at Brownlee LLP, a leading Alberta firm, where he focused on general commercial litigation.

United Yacht Transport LLC v. Blue Horizon Corporation, 2020 FC 1067: This case dealt with a claim for unpaid freight and fees owing to the plaintiff, a yacht transporter, for transporting the defendant yacht the Knight Ship from Florida to British Columbia.  Following arrival in British Columbia the yacht was arrested for the unpaid amounts.  David Jarrett and Harry Ormiston successfully brought a motion for summary trial pursuant to Rules 231(1) and 216(6) of the Federal Court Rules on behalf of the plaintiff yacht transporter seeking recovery of the initial freight amount plus additional charges for demurrage and other damages. The Federal Court accepted the plaintiff’s argument that the case was suitable for determination by summary trial and granted judgment in the amount of $160,199 USD.  In addition to granting judgment in favor of the plaintiff, the court rejected the defendants’ arguments regarding alleged negligent misrepresentations made by the plaintiff and a claim for a set-off relating to alleged damage of the hull of the yacht. In light of its success, in a subsequent unreported decision the court awarded the plaintiff its costs of the action, including double costs for all steps taken following service of a formal offer to settle that it beat at the summary trial.

Bluewater Rigging Ltd. v. The Owners and all others interested in the ship “Miksana”, unreported (October 16, 2020), Vancouver T-537-20 (FC, Prothonotary):  The plaintiff in this case claims for damages from the defendants for unpaid repair and refit work it performed to the two defendant vessels.  David Jarrett recently successfully defended the defendants’ motion to have the defendant vessels released from arrest without posting bail.

The Federal Court accepted the plaintiff’s argument that bail for the vessels should be set at the face value of the plaintiff’s claim plus 30% for costs and interest and dismissed the defendants’ motion.  The defendants were also unsuccessful in their attempt to have bail set at a reduced amount.  The court awarded the plaintiff lump-sum costs of $2,500 payable forthwith in any event of the cause in light of its success.

The Administrator of the Ship-Source Oil Pollution Fund v. Dr. Jim Halvorson Medical Services Ltd., and others, 2019 FC 35:  This case dealt with whether the Ship-Source Oil Pollution Fund (“SOPF”) could recover pollution clean-up costs from a company (or its principal shareholder) that was not the actual owner of a barge, but that remained, through inadvertence, the registered owner.  David Jarrett and Glen Krueger successfully defended the claim on behalf of the former owner of the barge.  The Federal Court accepted the defendants’ argument that the former owner (even though still identified as the registered owner) was not liable for the pollution clean-up costs as the former owner did not fall within the definition of owner as set out in section 75 of the Marine Liability Act given that actual ownership and control over the barge had been transferred to another person several years earlier.  The SOPF was also unsuccessful in its’ attempt to pierce the corporate veil and obtain recovery from the primary shareholder of the defendant company.   The court awarded lump-sum costs to the defendants in light of their success.

On September 16, 2013 the Federal Court of Appeal, after hearing from counsel for both parties, dismissed the appeal from the bench.

FFS HK Ltd. v. “P.T. 25” (The), 2010 BCSC 1675: Acted as co-counsel to a senior member of the firm in defending a vessel owner for a claim for damages arising from a spill of bunkering fuel and successfully arguing that its apportionment of the damages be set at 50%.

Employment law (unreported): Defended an employer in a Provincial Court action brought by a former employee seeking damages for wrongful dismissal and elevated damages due to the manner of termination. 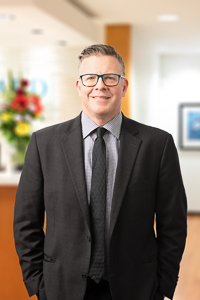