Peter is a founding partner of the firm with over 30 years of professional legal experience. He practices primarily in the fields of maritime and health law.

Peter’s maritime case work involves vessel arrest and security, carriage of goods by sea, enforcement of maritime liens, civil and regulatory liability for ship source pollution, collision, port state intervention, immigration, bodily injury, chartering disputes, and constitutional issues arising in the context of “navigation and shipping”. Peter also routinely advises on the preparation and completion of transport and terminal contract documentation and is often involved in casualty investigations in both a marine and non-marine context.

Peter was recently appointed an Adjunct Professor of law, and is co-teaching the Maritime Law course at the Peter A. Allard School of Law at the University of British Columbia to 2nd and 3rd year law students.

Peter is a regular contributor to local trade journals on maritime law topics. He has written for the Advocate, the International Insurance Law Review, and co-authored the section on Canada for the International Comparative Legal Guide to: Commodities and Trade Law 2006.  Peter is currently active on number of boards and other organizations. He is a director of a number of not-for-profit organizations including the Chamber of Shipping of B.C. He is past Chair of the Provincial (BC) and National Maritime Law Sections of the Canadian Bar Association (“CBA”), and was Chair of the Host Committee of ICMA, 2012.  He has a long tradition of charitable fund raising for different organizations. In 2008 and in 2014 Peter competed as a team member in the Sailors Society Three Peaks Challenge (a 24 hour effort to climb three of the United Kingdom’s tallest peaks – Ben Nevis (4,406ft) in Scotland; Helvellyn (3,117ft) in England and Snowdon (3,560ft) in Wales).  He has also been involved in the organization of many events (fundraising and educational) including Comité Maritime International, Vancouver.

Peter is recognized by his peers as a leader in the field of maritime law. He has been listed in the Best Lawyers in Canada since it was first published in 2006, is rated as Repeatedly Recommended for shipping and maritime law in the Canadian Legal L’expert Directory, is listed in Who’s Who Legal Canada for Shipping & Maritime and Who’s Who Legal for Shipping and is listed with Chambers and Partners for transportation law.

Peter frequently writes and presents on various legal topics. He is often a presenter on behalf of the Chamber of Shipping of British Columbia, through its “Business of Shipping” program. This has included presentations in Ottawa, Winnipeg, Calgary, Prince Rupert, Nanaimo and Vancouver. He has presented many times at the Canadian Maritime Law Association West Coast Open Meetings held in Vancouver, and more recently at the AGM in Quebec City, and has spoken on behalf of the Institute of Chartered Shipbrokers, the Vancouver Maritime Arbitrators Association and BIMCO.  He was a speaker on the enforcement of judgments and arbitral awards in 2016 at the International Maritime Arbitration Seminars held in Beijing and Shanghai, China, and in 2019 in Beijing and Ningbo.  Most recently Peter continued his work as a moderator during ICMA XXI which was hosted in Rio de Janeiro in March 2020. 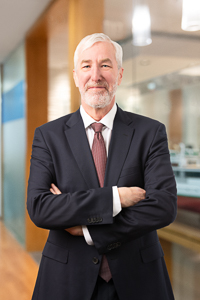